The Existence of Nothing 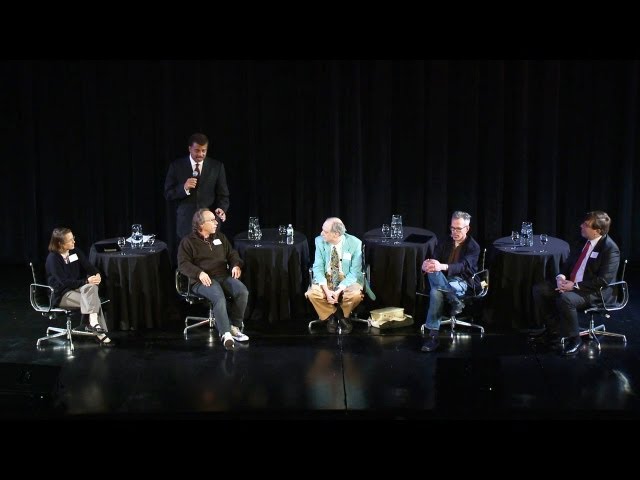 Join moderator and Hayden Planetarium Director Neil deGrasse Tyson as he leads a spirited discussion with a group of physicists, philosophers and journalists about the existence of nothing. The event, which was streamed live to the web, took place at the American Museum of Natural History on March 20, 2013.

J. Richard Gott, professor of astrophysical sciences, Princeton University, and author of Sizing Up the Universe: The Cosmos in Perspective

Jim Holt, science journalist and author of Why Does the World Exist? An Existential Detective Story

Lawrence Krauss, professor of physics, Arizona State University and author of A Universe from Nothing: Why There is Something Rather Than Nothing

Charles Seife, professor of journalism, New York University, and author of Zero: The Biography of a Dangerous Idea

The late Dr. Isaac Asimov, one of the most prolific and influential authors of our time, was a dear friend and supporter of the American Museum of Natural History. In his memory, the Hayden Planetarium is honored to host the annual Isaac Asimov Memorial Debate — generously endowed by relatives, friends, and admirers of Isaac Asimov and his work — bringing the finest minds in the world to the Museum each year to debate pressing questions on the frontier of scientific discovery. Proceeds from ticket sales of the Isaac Asimov Memorial Debates benefit the scientific and educational programs of the Hayden Planetarium

Thanos
1 week, 3 days ago
Views: 620 • Comments: 0 • Rating: 1
Tweets: 1 •
Beware of the 5 Lb. Bag of Sugarless Gummy Bears on Amazon.com - the Reviews Are Priceless! Oh, gummy bears! They're so tasty and delicious you can never eat just one. In fact most of us eat them by the handful. And with diet season in full swing, some of us may be looking at the ...

Dangerman
2 weeks, 3 days ago
Views: 818 • Comments: 0 • Rating: 4
Tweets: 0 •
Evangelicals and the Limits of Evangelical EmpathyLink to the article at: alternet.org She writes of her own experience where she turned against evangelicals. Here are the critical paragraphs to think about. And this will bring me to the ongoing evangelical moral panic over exvangelicals, those who ...