A Roadmap for the Future of Astrobiology 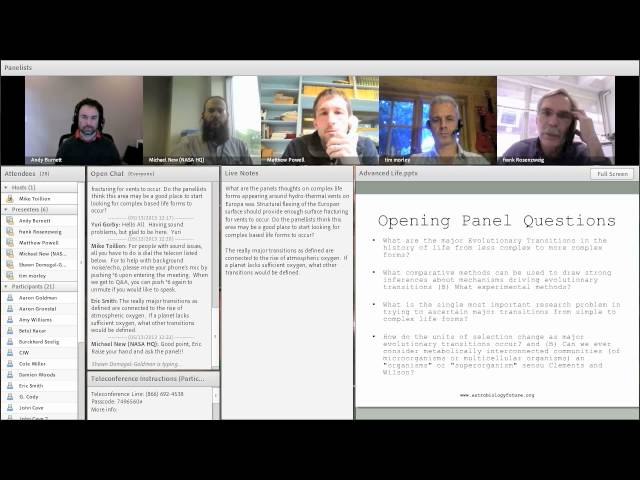 The NASA Astrobiology Program has started the process of outlining future research directions at the organization. Roughly every ten years, the program updates NASA’s official Astrobiology Roadmap – a document that guides research and technology develop

ment across NASA and encompass the space, Earth, and biological sciences. This time around, the program is opening the process up to the wider astrobiology community and calling for the public to participate in decisions that will guide research funding and missions for the coming decades.

In May of this year, the Astrobiology Program launched the Astrobiology Future site (astrobiologyfuture.org). The site hosts on-line hangouts and discussions, with each week dedicated to different scientific topics. This week kicks off with talks concerning the Early Evolution of Life and the Biosphere and Planetary Conditions for Life. The webinars begin today (Monday, May 20) at 1pm Eastern Standard Time. Video and transcripts from previous weeks are also available on the site, and there is still time be involved.

The first NASA Astrobiology Roadmap resulted from a meeting of 150 scientists at the NASA Ames Research Center on July 20-22, 1998. The discussion focused on a set of fundamental questions that were developed at a workshop on astrobiology held in 1996. The group of scientists drafted a document that was designed to guide astrobiology research for the next 20 years (with a particular emphasis on the first 5 years). Since then, the roadmap has been updated with contributions from scientists and technologists selected from government, universities and private institutions.

Each of these goals are expanded by objectives in the roadmap that directly inform how research funding is distributed by NASA. Previous versions of the roadmap are available from the Astrobiology Program website at: astrobiology.nasa.gov