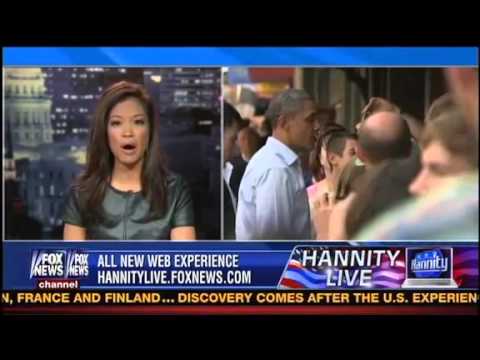 The interview is fairly typical as Playboy interviews with controversial figures go. But Sean Hannity does not disappoint on the derp front.

PLAYBOY: Next issue. More than 30 academies of science across the world have concluded that global warming is caused by human activity, but you’ve cast doubt on climate change for years.

HANNITY: You want the short answer or the long? Either way, I think it’s a crock of shit. I don’t believe it’s true, and I think that people have been put in a state of panic. I think the environmental movement is rooted in a political agenda, which is that capitalism is evil, that people are raping and pillaging the planet for profit. And I think it is rooted in redistribution.

I find people like Al Gore are the biggest, phoniest hypocrites of all. If global warming and carbon emissions are so bad, how does Al Gore justify getting on a private jet like we caught him on? How does he justify making money selling Current TV to Al Jazeera? That’s all oil money, Al. I can respect a guy like Ed Begley Jr. riding around on his bike. I even offered to bail Daryl Hannah out of jail after she was arrested for protesting the Keystone XL pipeline. She uses her own biofuels to drive her car. Beautiful! But you’ve got these other Learjet, limousine liberals, the hypocrites and Hollywood phonies. Leonardo DiCaprio flying around on New Year’s from Australia to Vegas, and he’s lecturing people about the cars they’re driving. So hypocritical. Come on!

PLAYBOY: How should we be managing our natural resources?

HANNITY: Hey, listen. I wouldn’t mind having a car that runs on water. My attitude is that we should seek out new technologies and inventions that will advance the human condition. And at the same time, we should be drilling, we should be fracking, we should be the Saudi Arabia of natural gas, we should be building refineries, which we haven’t built in 35 years, and nuclear facilities. France gets 75 percent of its power from nuclear plants. If the French can, we can. America is inhibited because of government regulation. You know all these people out of work? The minute you start drilling for natural gas and oil, every state can benefit, just as North Dakota does, which now has an unemployment rate of three percent. If we lessen our dependence on foreign oil, we’re less involved in the Middle East, where there’s such political instability, and the price of gas goes down to where the average American can pay less than $2 a gallon. That’s a tax cut for everybody.

PLAYBOY: Trump was one of the most vocal skeptics of Obama’s American citizenship. You’ve also said Obama grew up in Kenya. Do you regret saying that now?

HANNITY: But he did grow up in Kenya, and he told The New York Times that he went to a school there and one of the most beautiful things on the planet is Islamic prayer at sunset.

PLAYBOY: Are you fueling the myth that Obama’s a Muslim from Africa by saying that?

HANNITY: I never fueled the myth. How do you come up with this stuff? He did go to a Muslim school. He writes about it in his own book.

PLAYBOY: He did not grow up in Kenya.

I’m a Christian. All people are the children of God. I’m just telling you what Obama said in his own words. He didn’t go to a madrassa, which has negative connotations, but he did study the Koran and Islam and learn prayers that he could recite with a perfect accent, according to Nicholas Kristof in The New York Times. As for the issue of his birth certificate, I thought that was one of the oddest things, a noncontroversy that the White House easily could have ended but didn’t. If you’ve got the birth certificate, just release it and move on. That’s what I said.

He also gets defensive when asked about the drop in his ratings:

PLAYBOY: Let’s move on. Fox News’s ratings are down, and your show in particular has taken a hit this year.

HANNITY: No, actually, our ratings are back up.

PLAYBOY: Your ratings were down 35 percent in February.

HANNITY: Well, from the year before, which was an election year.

PLAYBOY: Rachel Maddow has beaten you in your time slot.

HANNITY: Never! Not once!

HANNITY: But overall, we’re at double her ratings. You’ve got to be careful how you make these comparisons

PLAYBOY: Fox News overall hit a 12-year ratings low in January and recently had a record low in a poll on viewer trust. The perception among many is that Fox News is out of it. Is there anything you’re doing to change that perception?

HANNITY: No. You know, I’ve been in this business a long time, and I’m not one who obsesses over ratings, but I will tell you this. There is a natural ebb and flow due to election years and major events such as Hurricane Katrina or Sandy or the wars in Iraq and Afghanistan. Any issue of that sort will drive ratings up and down. I will tell you that after the election, a lot of people who didn’t want Barack Obama to get a second term threw up their hands in disgust, including myself. I can go back and show you all the years that I’ve been through presidential elections on radio. You see the spike, you see the decline, you see the spike—it’s part of the news cycle. It’s the story of my life.

A real conservative would never agree to interview for such a dirt rag anyway!

Hannity has the nursing home market sewn up.

I only came to this page for the articles.

How did it get to the point that people can say we’re barely drilling for oil and gas when we have been going through oil and gas boom times? We’re drilling all over the frackin place.

I guess he blames all of the “leftists” in the energy industry for not building refineries and nuclear power plants, right? There is something called “economics” at play here…but I guess it wouldn’t be fair to expect someone like Hannity with no formal post-high school education to understand.

Not if you’ve seen the commercials that run during Fox programs.