This is how they treat uppity womens in Texas. Next time they won't forget the fire hoses. 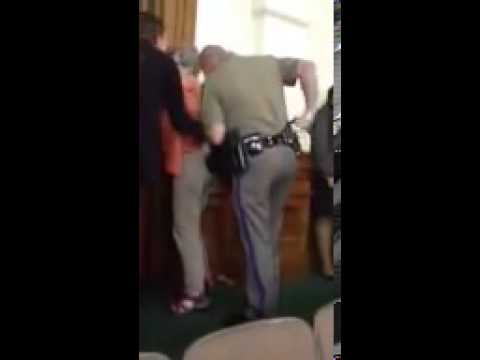 A 72 year old woman, Martha Northington, was arrested in the Texas Senate gallery, booked at the Travis County jail, and charged with at least one felony — assaulting an officer — as well as resisting arrest.

A records request has been sent to the Travis County jail where she was booked early Wednesday morning. The incident took place during the sit-in while Senator Wendy Davis filibustered the anti-abortion bill SB 5. State troopers were sent in by the dozens while the gallery was in uproar over what they believed was an overreach by Senators who hell bent on ending the filibuster and taking a vote before the 12am deadline.

An eyewitness in the booking room says that though she was originally charged with at least one felony, they were later reduced.

The witness said the officer appeared to be unsure what he was willing to actually charge her with and had trouble filing his report.

State Troopers Martha Northington Travis County Jail Felony
Recent Pages by Skip Intro:
Trump Partner in Running for New FBI Building - ABC2News.com Plot to Kill Muslims in Kansas Was Foreseen in Report on Right-Wing Extremism That Politicians Slammed Donald Trump's Candidacy Is a Threat to American Democracy The Man Who Showed Donald Trump How to Exploit Power and Instill Fear Too Good to Be True? Dick Morris Might Join the Trump Campaign