A Dixie flag in Utah 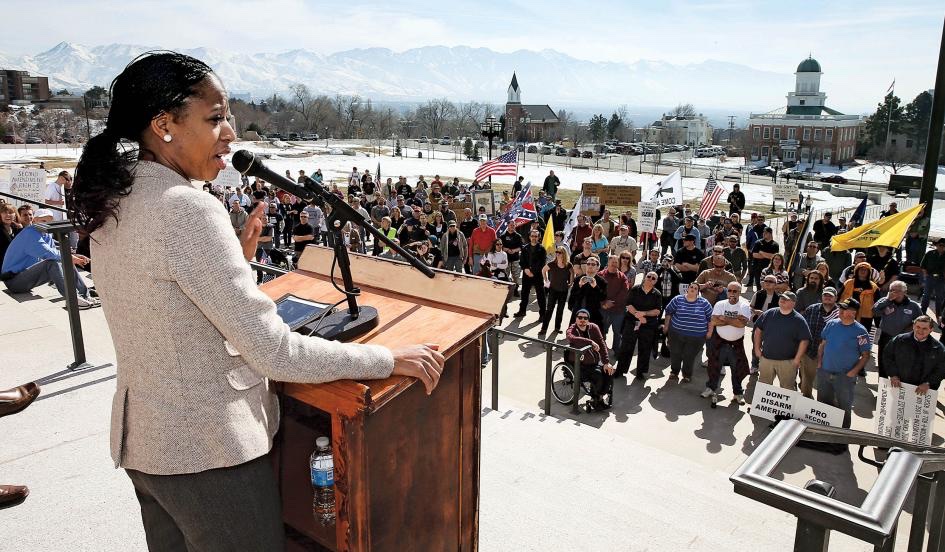 More: Mia Love Tries to Be the First Black Republican Woman in Congress

Mia Love is staring out at a sea of white faces. Just as she did the night before, and the night before that. It’s the same story here in Lehi, Utah, at the Lehi Legacy Recreation Center, where kids are learning karate in the room next door; the same story at the South Jordan Library, 14 miles away; the same story at a rally in the shadow of the Juab County Fairgrounds, “Home of the Ute Stampede,” where banner ads promote an upcoming demolition derby and a group of teenagers are huddled around a picnic table, agreeing that they don’t have a problem with gay marriage, as long as nobody tries to turn them gay.

White, white, white. In nearly every room Love enters as she stumps her way across Utah’s 4th District on a quest to become the first black female Republican in Congress, she is not just the only black person there. She’s the only person of any color, unless you count farmer tans.

This 39-year-old, Brooklyn-born daughter of Haitian immigrants and former mayor of Saratoga Springs, Utah, seems completely at home in a crowd of mostly old white dudes. What’s more, she gets a warmer reception here than when she made a speech at the University of Chicago Law School in 2013. Her advisers had urged her to stay way the hell away from the Windy City. “That’s Obamatown,” they told her. “Those people will eat you alive.”

After she spoke in Chicago, a black woman in the audience got up and said, “I don’t understand how you can be a black female living in Utah as a Republican in today’s America.”

“I told her I wasn’t elected in Saratoga Springs because of my race or my gender or my heels. I was elected by the people there because I had a plan and a vision to get us financially stable,” she said. “Think about people like Martin Luther King. Imagine if he decided to fit into this mold that society told him to fit into. Imagine if he just listened to the government when they told him he was a second-class citizen.”

That photo has to get in everyone’s face.

A closer shot of that Confederate Battle Flag:

Charles Johnson
Yesterday
Views: 116 • Comments: 0 • Rating: 1
Tweets: 9 •
Playing With AI-Generated “Art”I haven't really explored NightCafe's free online AI Art Generator (creator.nightcafe.studio) tool yet. I have only done some preliminary tinkering around with it but, I have to say, I'm more impressed with the results than I anticipated considering how little ...

Thanos
1 weeks ago
Views: 641 • Comments: 0 • Rating: 3
Tweets: 28 •
Leak of Compensation Data for Highest Ranking Distributors at One MLM (Video) Well, maybe not a leak so much (apparently) this particular multi-level marketing company (Monat, sells shampoo and personal healthcare products) left iself *wide open* on outsiders being able to see/download their data. (I suspect this MLM had this data ...

mmmirele
2 weeks ago
Views: 589 • Comments: 1 • Rating: 7
Tweets: 7 •
Who Our Friends and Enemies Are- Russia’s Drone War Erupts Thanks to IranThe point here is who opposes us (the democratic west) and who signs on with them. We all know who invaded who. Who annexed Crimea. And Iran chose to help the Russians rather than stay out of it let alone ...