Oops, he did it again 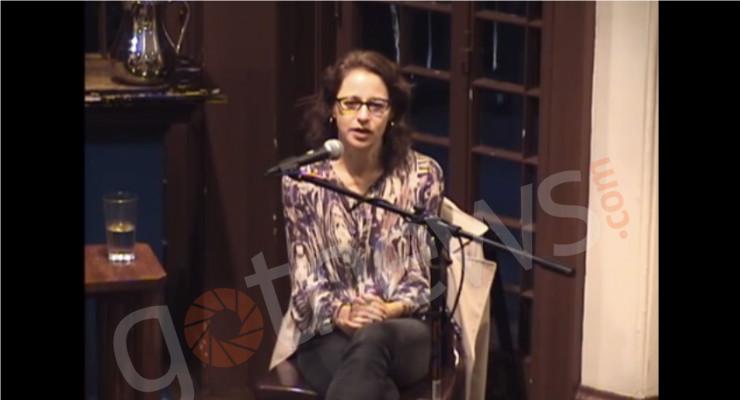 Sabrina Rubin Erdely, the disgraced journalist at the center of the University of Virginia fake rape allegations, “had a steady stream of problem boyfriends” says her family according to the Daily Pennsylvanian.

A profile of Erdeley, then going by her maiden name of Rubin, ran in a past issue of the Daily Pennsylvanian where she was described as a hippy who tie-dyed her Underoos.

“Sabrina was always off beat, a hippie before her time,” her mother told the Daily Pennsylvanian.

“According to her little brother, they were all emotionally disturbed,” reported the student newspaper at the time in a possible parody issue.

One of them was very seriously depressed and wanted to join the army,” Sammy Rubin said. He shaved his legs; he was sadistic.”

GotNews obtained a copy of the January 22, 1993 student newspaper from a source after offering a bounty for this information.

Erdely’s past relationships with men are the first indication of a motive for why she fabricated huge parts of the fake rape case involving fraudster Jackie Coakley.

And you’re not gonna believe this, but Chuck has apparently fallen for another hoax! I know! What are the odds?

Check the byline of his big BREAKING exclusive:

“Roy G. Biv” is a well-known acronym for the sequence of colors in a rainbow, but it also happens to be a pseudonym often used by the Daily Pennsylvanian for joke articles in the paper’s entertainment section — which happens to be known as “34th Street.”

Here’s one of those joke pieces about “Roy:” Yes, award-winning journalist Chuck C. Johnson has been taken in by another prankster. Oh no… I hope he didn’t pay too much for this scoop. That would be a shame.

While I was writing this article, Chuck added the following to his ludicrous post, apparently beginning to realize he screwed up again:

Note to David Weigel: Oh, and by the way, we have no idea if this issue is a parody or not. It’s probable that it is. I mean Roy G. Biv? Come on now.

But the fact that this was a joke shows us something.

Charles Johnson
4 days ago
Views: 253 • Comments: 0 • Rating: 1
Tweets: 9 •
Playing With AI-Generated “Art”I haven't really explored NightCafe's free online AI Art Generator (creator.nightcafe.studio) tool yet. I have only done some preliminary tinkering around with it but, I have to say, I'm more impressed with the results than I anticipated considering how little ...

Thanos
2 weeks ago
Views: 768 • Comments: 0 • Rating: 3
Tweets: 28 •
Leak of Compensation Data for Highest Ranking Distributors at One MLM (Video) Well, maybe not a leak so much (apparently) this particular multi-level marketing company (Monat, sells shampoo and personal healthcare products) left iself *wide open* on outsiders being able to see/download their data. (I suspect this MLM had this data ...

mmmirele
2 weeks ago
Views: 758 • Comments: 1 • Rating: 8
Tweets: 7 •
Who Our Friends and Enemies Are- Russia’s Drone War Erupts Thanks to IranThe point here is who opposes us (the democratic west) and who signs on with them. We all know who invaded who. Who annexed Crimea. And Iran chose to help the Russians rather than stay out of it let alone ...

libertyliberty
Yesterday
Views: 138 • Comments: 0 • Rating: 0
Tweets: 0 •
The World’s Largest Camera Is Nearly Complete The world’s largest camera sits within a nondescript industrial building in the hills above San Francisco Bay. If all goes well, this camera will one day fit into the heart of the future Vera C. Rubin Observatory in Chile. ...

Thanos
Yesterday
Views: 233 • Comments: 0 • Rating: 1
Tweets: 30 •
Indigenous Americans Ruled Democratically Long Before the U.S. DidDemocracy: it was older and more widespread than we thought. At the Oconee site, called Cold Springs, artifacts were excavated before the valley became an aquatic playground. Now, new older-than-expected radiocarbon dates for those museum-held finds push back the origin ...