The disturbing acceptance of European hate groups in Israeli politics 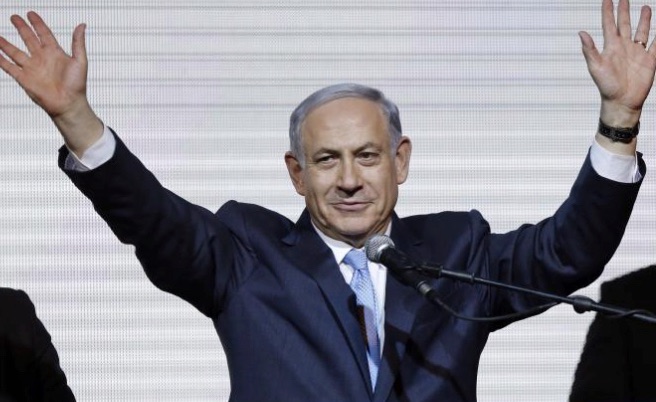 Long-time readers of LGF will recognize many of the names of people and organizations called out in this piece by Charles Hawley; these are the very fascists and antisemites who made alliances with American “counter-jihad” groups years ago, leading me to make a clean break with them and their hateful agenda. (Click on any of the tags below this post for more information on this back story.)

For the past few years I’ve been watching in horror as Israeli political parties like Likud increasingly embrace these awful people: Netanyahu’s Unholy Alliance With Europe’s ‘Anti-Semitic’ Far Right.

But one growing faction in Europe is welcoming Benjamin Netanyahu and his re-election with open arms. On the ultra-conservative periphery, among the xenophobic, nativist fringe, right-wing populists are unabashedly rejoicing. For them, Europe is engaged in a battle against encroaching Islam - and the hardliner Netanyahu, they believe, is doing yeoman’s work on the front lines. “Benjamin Netanyahu’s victory is a good thing for several reasons,” Geert Wilders, the vociferous anti-Islam incendiary from the Netherlands, said in an emailed statement. “We share his criticism of Iran … and his opposition to a Palestinian state in Judea and Samaria.”

“We are very happy,” agrees Filip Dewinter, a leading member of Belgian right-wing party Vlaams Belang. “It is a good thing for Israel, but also good for right-wing parties in Europe because he understands that the first danger for Europe is Islamisation.” David Lasar, a foreign policy co-ordinator for the Austrian Freedom Party, echoed that sentiment. “For sure, I am very happy,” says Lasar, who has worked hard in recent years to develop ties with staunchly conservative parties overseas. “It is a very important step that Netanyahu has won the election.”

From the perspective of a European chauvinistic periphery that has increasingly been striving for mainstream legitimacy in the recent past, the enthusiasm is understandable. As groups like the Austrian Freedom Party, France’s Front National and the Swedish Democrats have long histories of anti-Semitism, recent years have seen them attempting to refocus their enmity on Islam and Islamists. With that shift has come a recognition that Israeli conservatives, with their rejection of a Palestinian state and hardline approach to Islamism, are their natural allies.

Thanos
6 days ago
Views: 557 • Comments: 0 • Rating: 3
Tweets: 28 •
Leak of Compensation Data for Highest Ranking Distributors at One MLM (Video) Well, maybe not a leak so much (apparently) this particular multi-level marketing company (Monat, sells shampoo and personal healthcare products) left iself *wide open* on outsiders being able to see/download their data. (I suspect this MLM had this data ...

mmmirele
6 days, 18 hours ago
Views: 501 • Comments: 1 • Rating: 7
Tweets: 7 •
Who Our Friends and Enemies Are- Russia’s Drone War Erupts Thanks to IranThe point here is who opposes us (the democratic west) and who signs on with them. We all know who invaded who. Who annexed Crimea. And Iran chose to help the Russians rather than stay out of it let alone ...

Rightwingconspirator
6 days, 19 hours ago
Views: 511 • Comments: 1 • Rating: 1
Tweets: 18 •
Butterflies and Lighthouses I am a crap photographer, so don't expect much. We went to the Insectarium just north of Deer Lake, Newfoundland, to look at their butterfly garden. Here are some butterfly photos. I have no idea what sorts of butterflies ...

Anymouse 🌹🏡😷
1 week, 3 days ago
Views: 577 • Comments: 2 • Rating: 10
Tweets: 0 •
Superspy’s First Half!! Hello LGF!!I was introduced to this little corner of the Internet through running posts of my uncle’s, Dangerman. I made an account a couple of months ago knowing full well I would never post on here until I had ...

Superspy
1 week, 4 days ago
Views: 709 • Comments: 5 • Rating: 10
Tweets: 0 •
Here Are the Winners of the 2022 Ig Nobel Prizes Economics Prize Citation: "Alessandro Pluchino, Alessio Emanuele Biondo, and Andrea Rapisarda, for explaining mathematically why success most often goes not to the most talented people but instead to the luckiest." There is a strong belief in Western culture that ...

Cheechako
2 weeks, 2 days ago
Views: 994 • Comments: 1 • Rating: 0
Tweets: 1 •
Inflation Is a Problem. Is the Federal Reserve the Only Way to Fix It? What if we got all this dead wrong? The Carter era inflation "fix" cost me my family legacy via a 3 generation old firm that went down, and delayed my own marriage by years. What if that inflation had ...

Thanos
3 weeks, 3 days ago
Views: 1,611 • Comments: 0 • Rating: 2
Tweets: 3 •
One to Watch: Rising Star AMIRAH Impresses With Latest Release “Silently” AMIRAH is an independent artist with a talent for writing infectious tunes and relatable narratives. Inspired by internationally acclaimed artists such as Rihanna, Alicia Keys and Halsey, AMIRAH’s musical journey began at a very tender age. Being the avid ...