No, Conservatives - the US Navy Has NOT Filed Charges Against Lt. Cmdr. Timothy White

There they go again 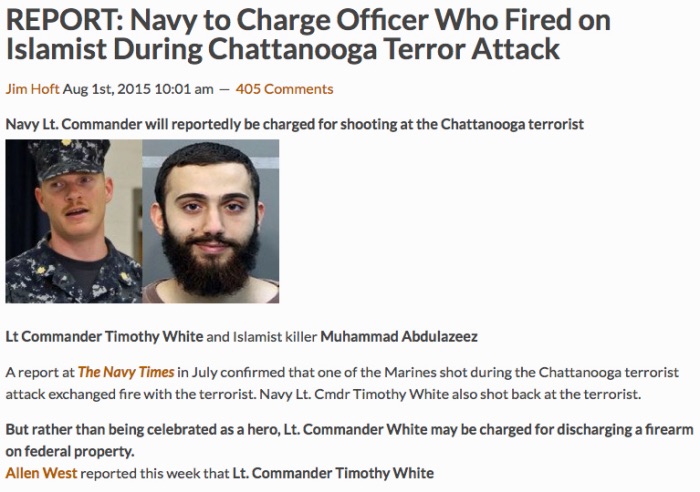 DERPHere we go again. It’s one fake story after another from the right wing, and tonight they’re all screaming in unison about a completely bogus outrage launched by discredited war criminal Allen West and quickly picked up by the Stupidest Man on the Internet, Jim Hoft, without ever checking to see if it was actually, you know, true. And from there it’s rapidly spreading throughout the idiotic right wing media. A report at The Navy Times in July confirmed that one of the Marines shot during the Chattanooga terrorist attack exchanged fire with the terrorist. Navy Lt. Cmdr Timothy White also shot back at the terrorist.

But rather than being celebrated as a hero, Lt. Commander White may be charged for discharging a firearm on federal property.

A spokesman for the U.S. Navy on Sunday denied reports that disciplinary charges will be filed against Lt. Cmdr. Timothy White for discharging an unauthorized weapon on federal property.

This is such a pathetic example of the complete lack of ethics or standards in the right wing blogosphere. If Jim Hoft or Allen West had even a tiny shred of decency or honesty they would immediately retract this false story. But they won’t. They never do. And there are already more than a thousand ranting, raving comments posted at Hoft’s nasty website.

And to make this even more ridiculous, Democrat Jim Webb is now helping circulate this right wing fairy tale.

Navy charging LCDR Tim White w/ a crime for trying to defend our sailors & Marines in #Chattanooga? He deserves a medal, not an indictment.

.@JimWebbUSA You need to retract this tweet: The US Navy Is NOT Filing Charges Against Lt. Cmdr. Timothy White http://t.co/ilkOeJuoK9

Imagine my surprise that Allen West has actually posted an update.

Charles Johnson
3 days ago
Views: 248 • Comments: 0 • Rating: 1
Tweets: 9 •
Playing With AI-Generated “Art”I haven't really explored NightCafe's free online AI Art Generator (creator.nightcafe.studio) tool yet. I have only done some preliminary tinkering around with it but, I have to say, I'm more impressed with the results than I anticipated considering how little ...

mmmirele
2 weeks ago
Views: 755 • Comments: 1 • Rating: 8
Tweets: 7 •
Who Our Friends and Enemies Are- Russia’s Drone War Erupts Thanks to IranThe point here is who opposes us (the democratic west) and who signs on with them. We all know who invaded who. Who annexed Crimea. And Iran chose to help the Russians rather than stay out of it let alone ...

Thanos
Yesterday
Views: 228 • Comments: 0 • Rating: 1
Tweets: 30 •
Indigenous Americans Ruled Democratically Long Before the U.S. DidDemocracy: it was older and more widespread than we thought. At the Oconee site, called Cold Springs, artifacts were excavated before the valley became an aquatic playground. Now, new older-than-expected radiocarbon dates for those museum-held finds push back the origin ...