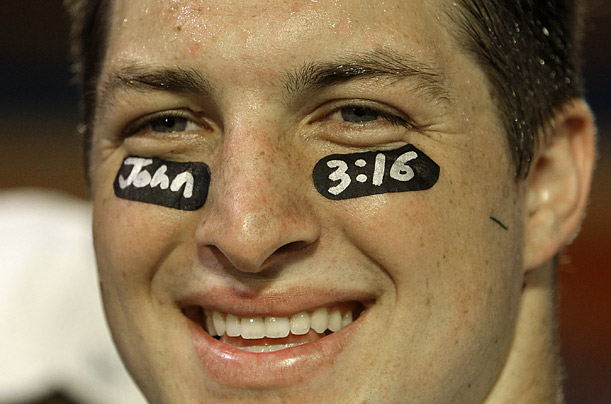 Don Jones is a defensive back for the Miami Dolphins, who tweeted “OMG!” and “Horrible” in response to Michael Sam’s kissing his boyfriend on national TV the moment he was drafted by the St. Louis Rams in last week’s NFL draft. Jones was fined an undisclosed sum by the Dolphins, and suspended from all team activities until he completes what the Dolphins called “educational training,” which Cal Thomas, and other right wingers have called a “re-education camp.”

Then Cal decries the persecution of Tim Tebow, in a column entitled “Free speech not so free when discussing gay rights:”

Michael Sam, the first openly gay player to be drafted by a National Football League team — the St. Louis Rams picked him 249th in the last round — is being treated by the media and those in the gay rights movement as the equivalent of an early American pioneer.

Miami Dolphins safety Don Jones, apparently, didn’t get the memo. Jones tweeted “OMG” and “horrible” after he saw Sam and his boyfriend kiss each other live on ESPN. His tweet was quickly taken down, but the political correctness police swooped in anyway. Jones has been fined and suspended. He’s also being forced to attend “educational training” to get his “mind right,” to borrow a phrase from the film “Cool Hand Luke.” This sounds like the old communist “re-education” camps.

Dolphins Coach Joe Philbin called Jones’ comment “inappropriate and unacceptable.” Jones issued a statement that read like it had been written by a lawyer, apologizing for his “inappropriate” tweet and taking “full responsibility” for his comment.

How quickly things have changed from the recent experiences of Tim Tebow. When the quarterback heroically led the Denver Broncos to a playoff victory in 2012 and dropped to one knee, as he often did to express gratitude to God (a move that quickly became known as “Tebowing,” which spawned countless YouTube parodies), he was widely ridiculed by many of the same entities that now defend Michael Sam, including some NFL players and even “Saturday Night Live,” which in a skit had “Jesus” offering Tebow advice while sitting next to him on a locker room bench.

Yet, Tebow endured a sometimes silent and often shouted campaign to brand him in a negative way. He was called “polarizing.” It was said he had “baggage,” though his “bags” were considerably lighter than many other professional athletes who have had drug and alcohol problems, incidents with guns at strip clubs and numerous out-of-wedlock children.

NFL players who joined in the mockery were not fined, disciplined or forced into education training camp. Such is the cultural double standard between the way Michael Sam is being treated and the experience of Tim Tebow. But what should one expect these days when anything goes, except for free speech critical of the LGBT crowd?

A commenter steals my thunder in his response:

Cal’s Supreme Court has determined free speech is not free. It is whatever money can buy. When Sam starts laying a liplock on other players during a game and waving a gay rights flag you can equate it to Tebow. More false equivalency from a water carrier for the far right. The government did not punish the Dolphins player his employer did. No violation of free speech occurred.

Indeed, if Michael Sam were to paint a gay rights rainbow flag under his eyes as Tebow did with the “John 3:16” Bible verse below: Or pose for a media photo below three gay rights flags as Tebow did with three crosses below: Or perform some pro gay message (whatever that might be) every time he, say, records a quarterback sack in the way Tebow did with “Tebowing” when he scored a touchdown: Or consistently draw attention to his sexual orientation the way Tebow did with is faith throughout his career, Thomas might just have a point. The media is probably going to pay Sam a lot more attention than a player drafted in the 7th round and only eight spots ahead of “Mr. Irrelevant,” (the nickname given to the last player picked in the draft) would normally deserve. So far though, Sam has not made an ostentatious display of his orientation part of his persona in the way Tebow did with his faith. And it was the latter reason why Tebow came under a lot of criticism, much of it reasonable, if you ask me.

So all Thomas is left with is Christian Persecution Syndrome whining and false equivalences. Do note that Thomas had nothing to say on whether or not the tweets made by Don Jones were appropriate or not, which is typical of wingnuts when they or something they believe in is called out for bigotry, or any other over the line behavior.

Whatever happened to personal responsibility with conservatives?

More: Free Speech Not So Free When Discussing Gay Rights