Peter King: ‘The Crazies Have Taken Over the Party’ 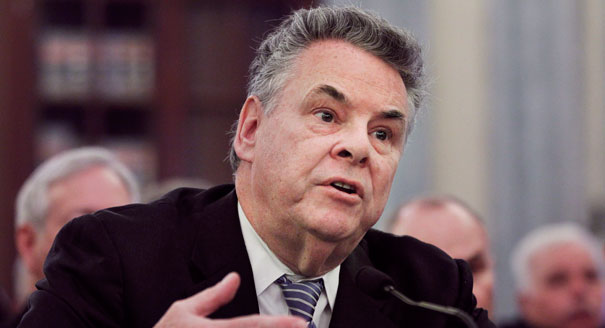 The GOP civil war is over, and we lost. We being indys’, Dems, Greens, all but the Tea party base and its hand puppet congress. Edit, later thoughts….-Now some may revel in the troubles this makes for the GOP, or the right in general. Beware, methinks our nation runs best when credible opposition beats the political landscape into reasonable shape, something that had completely failed us of late.

“I think it signals the crazies have taken over the party, taken over to the party that you can remove a speaker of the House who’s second in line to be president, a constitutional officer in the middle of his term with no allegations of impropriety, a person who’s honest and doing his job. This has never happened before in our country,” King said in an interview with CNN’s Dana Bash on Friday afternoon. “He could have stayed on.”

More: Peter King: Boehner Exit Means ‘The Crazies Have Taken Over the Party’

I’ve been observing Peter King for years, so I don’t think he should be saying anything about ‘crazies’ taking over the GOP because he helped it happen. It has only been in the last few years that he began to make sense from time to time, but for most of his time in Congress, he’s been a ‘crazy’ himself, and he seemed to be very proud of it.

Peter King has a lot of nerve making such a statement.

I’ve been observing Peter King for years, so I don’t think he should be saying anything about ‘crazies’ taking over the GOP because he helped it happen. It has only been in the last few years that he began to make sense from time to time, but for most of his time in Congress, he’s been a ‘crazy’ himself, and he seemed to be very proud of it.

Think about it though.

What if Paul King is one of the sane ones?

My God, we’re in trouble.

Now some may revel in the troubles this makes for the GOP, or the right in general. Beware, methinks our nation runs best when credible opposition beats the political landscape into reasonable shape, something that had completely failed us of late.

I think most people here at LGF understand full well that we need to have a credible & loyal opposition, but the GOP has been nurturing its ties to the extreme/religious right for decades. I’m really sick & tired of their alternating belligerence & whining, not to mention the so called “sane” establishment acting as enablers.

They created this situation with their eyes wide shut, so to speak. Now the inmates are running the asylum & the entire structure is in flames. I don’t know if they have anyone left who can save them. Maybe it’s better to just let it burn to the ground and then try to rebuild. America is changing. Time cannot be stopped or dialed back, no matter how much they may wish it to be so or how much they fear the future.

As for Peter King, I have nothing but contempt for him. He openly supported the IRA for years, and now every time there’s a terrorist attack, especially in the West, he starts scare mongering about how the government needs to monitor American Muslims more closely. WTF? Should we have been monitoring Irish Catholic Americans during all the years the Troubles were going on? He’s a rank hypocrite of the first order and I have no respect for him whatsoever.

Pete would be credible if he weren’t just as bad as the crazies in many others ways.

mmmirele
6 days, 13 hours ago
Views: 493 • Comments: 1 • Rating: 7
Tweets: 7 •
Who Our Friends and Enemies Are- Russia’s Drone War Erupts Thanks to IranThe point here is who opposes us (the democratic west) and who signs on with them. We all know who invaded who. Who annexed Crimea. And Iran chose to help the Russians rather than stay out of it let alone ...