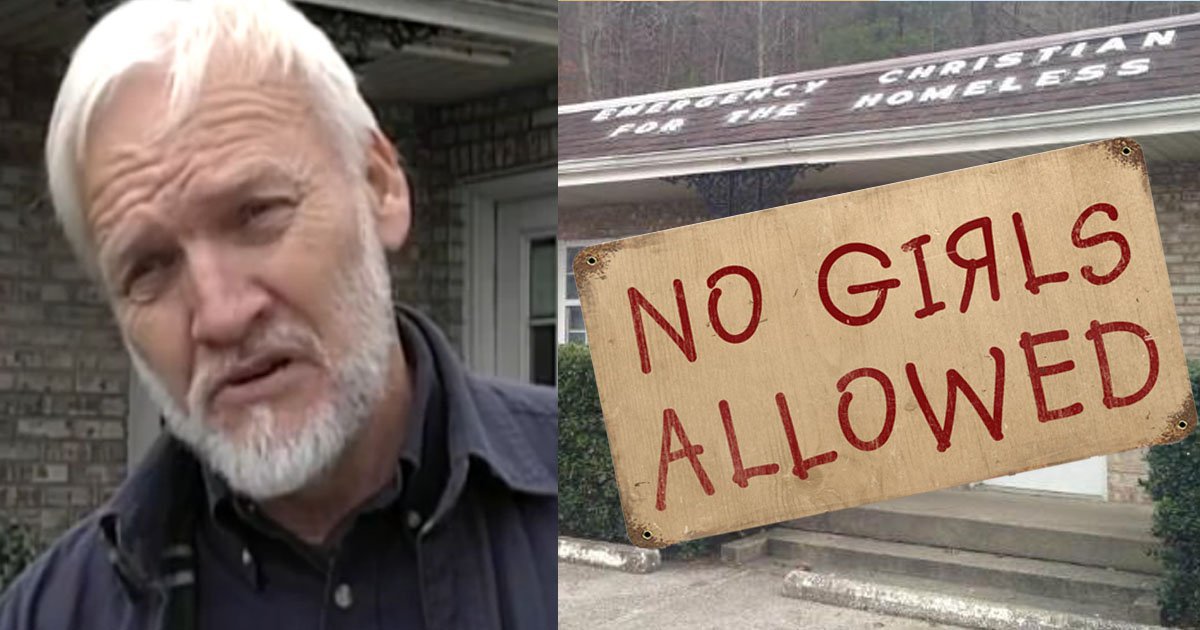 If you’re homeless in the winter, life can be tough. But in Williamsburg, Kentucky, things just became a lot tougher — if you’re a female. For those who don’t have anywhere else to go,
Emergency Christian Ministries’ homeless shelter is the only place in town, and it just became a “men only” establishment. Why would this happen? Director Billy Woodward says that he decided to kick about 10-12 women out of the shelter based on the Bible.
Woodward claims that people at the shelter were having sex, though he provides no evidence of that assertion at all. The shelter previously had both men’s and women’s dorms, but Woodward says he made the decision to kick women out because some people may or may not have been engaging in the Devil’s Business. “

They may want to meet or even slip in a room occasionally and then we can’t have that. It seem like these last days it’s getting worse. Ungodly time.”

The decision to throw women and (female) children out on the street just before the holidays was made two weeks ago — a decision Woodward justifies with the Bible. “I don’t know if what’s happening, uh, if it’s a whole because they know it’s a men and women’s shelter, they say, ‘well, we’re homeless — maybe we can find somebody, a mate or something,” he explained, adding that “if they done it right, they’d be fine but they go overboard with it.” Woodward did not explain how they could “done it right.”

Good God, what a fucking idiot. He’ll be one of those people that ends up in Hell trying to figure out how in the world he could have ever wound up there…

Hell is pleased with that man.

If one reads the bible, one would discover that sexual immorality has been around since the Great Engineer designed humans. Nothing ungodly about it at all.

Pastor Asshole proves that the real God he worships is Ayn Rand.

Williamsburg, by the way, is in the southeastern side of KY, close to TN.

Here’s some demographic info, via Wikipedia.

As of the 2000 census Whitley County, Kentucky of which Williamsburg is the county seat consisted of 22,645 Evangelical Christians, 1,741 Mainline Christians, 130 Catholics, and 11,394 individuals who are not members of the 188 groups included in the Churches & Church Membership Data. As of the same date 69.4% of individuals in Whitley County were members of the Southern Baptist Convention.[12] Williamsburg boasts 21 religious institutions or one religious institution per 243 citizens, and as of the year 2000 the region that contains the town has been designated the second densest region of the bible belt.[13] University of the Cumberlands, located in the town is a private Christian college affiliated with the Kentucky Baptist Convention, a member of the Southern Baptist Convention.

Also, 95% white, but that’s probably so obvious it need not be stated.