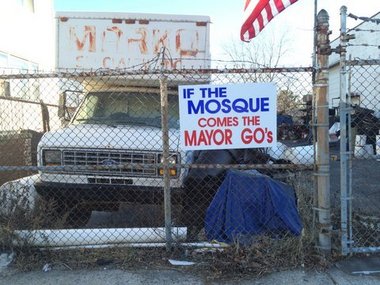 *SIGH* Here we go again. Added emphasis is mine.

BAYONNE — With less than a week left before the city zoning board decides whether to approve the plan for a Muslim community center, residents vehemently opposed to the project are putting up signs and organizing a protest at City Hall.

The signs — which read “If the mosque comes, the mayor (goes)” and “No mas (‘No more’ in Spanish), no mosque” — have been posted near the vacant warehouse where the community center would be located at the east end of 24th Street off Avenue F.

A flier for a Jan. 12 meeting of residents opposed to the community center featured a Sept. 11 logo with the word “remember” in block letters.

Joe Wisniewski, 50, of 23rd Street said he and other neighbors put up the signs, and that a grassroots movement of “at least 100” people are against the center primarily because they believe it would bring in additional traffic and noise.

“It’s a quiet area. We don’t want the cars coming and going at all times of the day, even if it’s just on Friday when they have their main services,” he said. […]

After years of searching for a permanent religious home, the local Muslim community has set its sights on converting the warehouse at 109 E. 24th St. into a community center that would offer, among other things, prayer halls, classrooms and a soup kitchen.

Wisniewski, who has previously suggested a Catholic church be built at the site instead of a Muslim community center, stressed that he and other residents opposing the project aren’t doing so strictly on religious grounds. […]

Wisniewski said he and other neighbors are inviting Donald Trump and political activist Pamela Geller to a demonstration they have planned for next Tuesday at 5:30 p.m. in front of City Hall. […]

Uh-huh, if this grassroots movement is all about the traffic & noise and not religion, then why the reference to 9/11? Why would this Wisniewski person suggest a Catholic church be built at the site? Do Catholics not drive? Do they not make any noise? The same guy has also brought up other terrorist attacks, and even comments by Trump about illegal immigrants from Mexico. Note that demagogue DonaldTrump & extremist Pamela Geller are invited to their demonstration at City Hall this coming Tuesday, but never you mind that—it’s all about the traffic & noise, not anti-Muslim bigotry and scapegoating.

Additionally, if he knows the main services are on Friday, then why all the fuss over a weekly event? I mean, they’re observant Muslims—it’s not like they’re going to be throwing wild parties with loud music, drinking & dancing until all hours, FFS.

Here’s Google’s street view of the lovely dead end street they’re so concerned about. The current “mosque” is a cramped space the Muslims have been renting in the basement of a Catholic church for six years. Here’s more info at their website regarding their current situation and their plans for the property, if allowed to build their community center.

Lots of white trash and corruption in Bayonne. The prosecutor got her job because her daddy gives lots of money to politicians and she didn’t know what she was doing until she got fired over this:

I had a client who came to court with his mom and mom told me that she had spoken to the new prosecutor and the judge that day about the case. Needless to say I got a killer deal.

Uh-huh, if this grassroots movement is all about the traffic & noise and not religion, then why the reference to 9/11?

That moment when the thinnest veil of all slips away… Transparent as museum glass. Real commuter hell they got on that dead end street.///

I went to the website, and it appears that sad sack building in need of an upgrade lies on either a dead end street or otherwise removed cul-de-sac area. As a resident, I would be pleased as punch all the traffic would be directed somewhere other than directly down the middle of a residential street, whether it was a mosque or a church or whatever. You know, all the benefits of accessibility, without being in the middle of everything. Seems perfect.

If this was really about traffic concerns there would be zero reason to invite two inflammatory people like Trump and Geller, nor would you be seeing 9/11 signs that read “REMEMBER.” (Remember what? That these particular Jersey Muslims caused 9/11? Uh, not.) No, this is about anger and shaming.

And a soup kitchen? I don’t know the neighborhood, but it seems any kind of support like that is a positive thing for the community. If these Jersey Muslim devils wanted to be all stealthy and sneaky, and doing all their subversive stuff, WTF would they bother with the gesture of anything as public as a soup kitchen?

I don’t know why people don’t ask themselves even the most basic questions, except the answers tend to make them look foolish and assholish.

Thanos
5 days, 7 hours ago
Views: 527 • Comments: 0 • Rating: 3
Tweets: 28 •
Leak of Compensation Data for Highest Ranking Distributors at One MLM (Video) Well, maybe not a leak so much (apparently) this particular multi-level marketing company (Monat, sells shampoo and personal healthcare products) left iself *wide open* on outsiders being able to see/download their data. (I suspect this MLM had this data ...

mmmirele
6 days, 1 hour ago
Views: 461 • Comments: 1 • Rating: 7
Tweets: 7 •
Who Our Friends and Enemies Are- Russia’s Drone War Erupts Thanks to IranThe point here is who opposes us (the democratic west) and who signs on with them. We all know who invaded who. Who annexed Crimea. And Iran chose to help the Russians rather than stay out of it let alone ...

Rightwingconspirator
6 days, 2 hours ago
Views: 479 • Comments: 1 • Rating: 1
Tweets: 18 •
Butterflies and Lighthouses I am a crap photographer, so don't expect much. We went to the Insectarium just north of Deer Lake, Newfoundland, to look at their butterfly garden. Here are some butterfly photos. I have no idea what sorts of butterflies ...

Superspy
1 week, 4 days ago
Views: 668 • Comments: 5 • Rating: 10
Tweets: 0 •
Here Are the Winners of the 2022 Ig Nobel Prizes Economics Prize Citation: "Alessandro Pluchino, Alessio Emanuele Biondo, and Andrea Rapisarda, for explaining mathematically why success most often goes not to the most talented people but instead to the luckiest." There is a strong belief in Western culture that ...

Cheechako
2 weeks, 1 day ago
Views: 953 • Comments: 1 • Rating: 0
Tweets: 1 •
Inflation Is a Problem. Is the Federal Reserve the Only Way to Fix It? What if we got all this dead wrong? The Carter era inflation "fix" cost me my family legacy via a 3 generation old firm that went down, and delayed my own marriage by years. What if that inflation had ...

Pips
2 weeks ago
Views: 946 • Comments: 0 • Rating: 0
Tweets: 0 •
One to Watch: JASMINEGOLD Return With Scintillating Debut Album Serpent JASMINEGOLD have returned with their incredible debut album, Serpent. The alternative hip-hop duo from North Florida (formed by David Nights and KJ) only burst on the scene last year but have been gaining traction quickly with over 200,000 views ...

Pips
2 weeks, 6 days ago
Views: 1,247 • Comments: 0 • Rating: 0
Tweets: 0 •
One to Watch: Rising Artist Zenya Ray Makes a Huge Impression With Emotive Track “Even the Angels” Zenya Ray is a composer, with a rapidly growing and loyal following, based in Sacramento, California, and originally from Japan. Despite only making his music debut in 2022, he’s managed to get off to a flying start, with his ...