Today Marks The 69th Anniversary Of The DDay Invasion of France 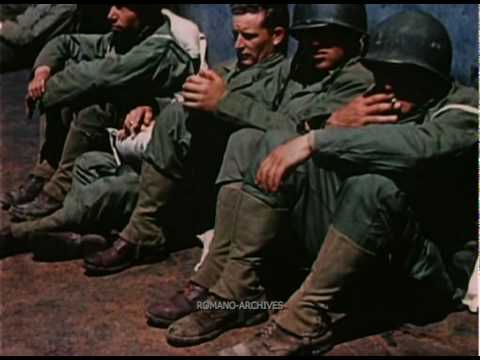 This became the turning point of WWII and the end of Hitler’s reign of terror in Europe.
Here are some videos and pictures of DDay all in color.

Before and After D-Day: Color Photos From England and France, 1944

It’s no mystery why images of unremitting violence spring to mind when one hears the deceptively simple term, “D-Day.” We’ve all seen — in photos, movies, old news reels, and usually in grim black-and-white — what happened on the beaches of Normandy (codenamed Omaha, Utah, Juno, Gold and Sword) as the Allies unleashed their historic assault against German defenses on June 6, 1944.

But in color photos taken before and after the invasion, LIFE magazine’s Frank Scherschel captured countless other, lesser-known scenes from the run-up to the onslaught and the heady weeks after: American troops training in small English towns; the French countryside, implausibly lush after the spectral landscape of the beachheads; the reception GIs enjoyed en route to the capital; the jubilant liberation of Paris itself.

As presented here, in masterfully restored color, Scherschel’s pictures — most of which were never published in LIFE — feel at-once profoundly familiar and somehow utterly, vividly new.

A few pics. There are many more at the link. American combat engineers eat a meal atop boxes of ammunition stockpiled for the impending D-Day invasion, May 1944. Maintenance work on an American P-47 Thunderbolt in a makeshift airfield in the French countryside, summer 1944

And here are three great color videos of the battle itself…